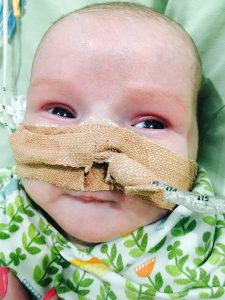 Today started off with a blood transfusion due to low haemogobin numbers.  This is a number that we are always chasing and topping up due to the amount of blood that Thomas has taken everyday for cultures, blood gases and other tests.

We don’t have any results through yet to know if he had a non haemolytic transfusion reaction, but the general thought is that it is more ventilator related than blood or clot.

Thomas had a bronchoscope performed today. I was able to watch this procedure which I was very pleased about as I was able to see a huge difference between pre and post surgery.

Thomas’ consultant told me that he was ‘pleasantly surprised’ with the his results and the dr overseeing the scope also explained that his airways appeared better than they had expected. He has severe tracheobronchomalacia which we have known since he was 5 days old, however today showed that his surgery has significantly reduced the compression on his airways and that they appear to be able to stay open without the pressure from ventilation.

The scope did show that his airways are narrow, which is to be expected as enlivening the pressure cannot make them repair, only time will do that. It also showed that they were quite pulsatile – meaning that the heart vessels could be touching them causing them to pulsate. He will have a CT angiogram tomorrow to see how the heart and the breathing tubes are all positioned and working in relation to each other.

Thomas had to be fully sedated and paralysed for this procedure to be done so he is back on full ventilation. This time this doesn’t feel like a set back as we know that he can get low enough for them to now consider extubation. He will be under sedation for a good few hours now. Generally a good day.