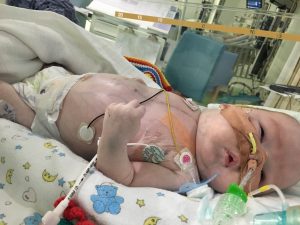 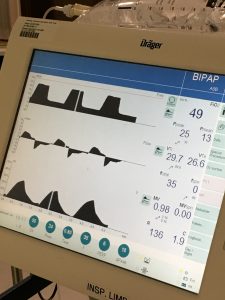 Today hasn’t been the best of days for Thomas.

His day of problems started off when he has some physiotherapy to help him dislodged and being up any secretions that stick within his large airways and deeper within his lungs.

The physio did exactly that, and dislodged a lot of thick, sticky secretions. These weren’t immediately removed and his alveoli plugged causing him to have big issues exchanging gases. He was given lots of suction, however he had so much going on that he wasn’t able to cope, was working very hard sucking his stomach in to help him breathe, and eventually stopped tying to breathe for himself. His ventilator was set to do 15 breaths a minute for him so he was only getting those breaths for a short while.

Thomas was also given an NJ tube today, this is a feeding tube that bypasses his stomach and goes straight into his jejunum (top of the small intestine). This should hopefully help with his failure to gain weight as the milk is not longer going into his stomach (which was then usually vomited out due to coughing as his ET tube irritates him). Hopefully we should now start to see him gain weight. During this procedure, Thomas was muscle relaxed, meaning he needed full ventilation as he is essentially paralyzed.

His cpr is still in the hundreds, and his white blood cells are also rising. He has been tested positive for enterovirus and rhinovirus (so he has a cold) but more of a concern, is his blood cultures have shown a growth of an unknown bacterium in his broviac line blood and from his circulating blood. Any blood infection is a concern, so he was immediately put on a combination of antibiotics to get on top of it whilst waiting to find out what it is once the cultures have grown.