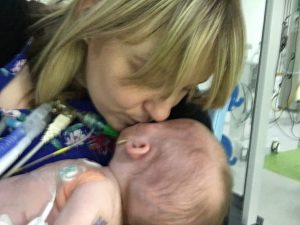 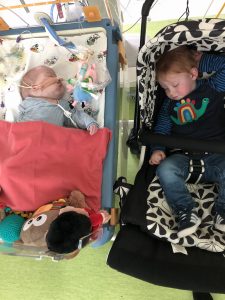 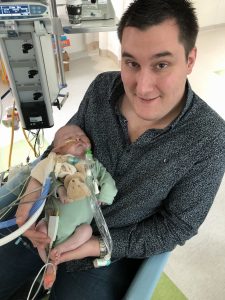 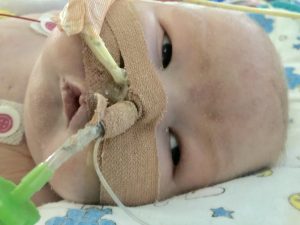 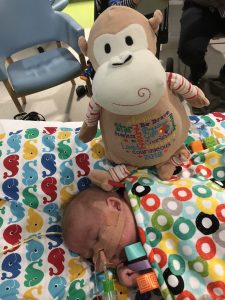 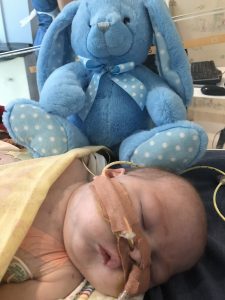 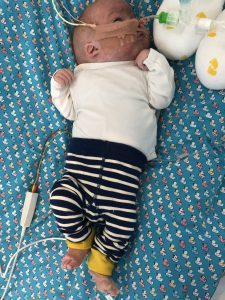 Sorry for thr the lack of updates on Thomas over the last month. Not much has been happening in terms of lreogress forwards and we’ve been stuck pretty much waiting. So, what has been happeneing…:

An interesting few weeks. Since the last update on the 28th Jan, there have been a few ups and downs and he’s pretty much in the same place ventilation wise.

We were told that Thomas’ main immediate issues were his nutrition (he was failing to thrive), his continual infection cycle and his airways issue.

So, his feeding method was changed to continual NJ needs (into his jejunum) with high calorie formula and topups of EBM as extra NG. This seems to have been the answer to his weight gain. Thomas has finally started to gain weight and is keep it up and now weights just over 11lb so is no longer failing to thrive.

In terms of ventialtion, for a while now we have been in talks with the long term ventilation team about moving forward and getting Thomas off the ventilator in intestive care. He’s been pushed to extubatable pressures and has had failed extubations. He now is unable to get to extubatable pressures for unknown reasons. Is it his bronchomalacia? Is it the continual cycle of infections? We don’t know. So with talks of long term ventilation (tracheostomy and ventilation to come home on) we started to think to this being the future, if we could get him to a stable point on the ventilator.

With this in mind however, Thomas had a bronchogram to have a look at hthe dynamics of his airways once again (his 4th one now). With this, and the results of his recent bronchoscope it was decided that he would be able to have an airway stent fitted in his left bronchus. He has a small area of complete collapse but after this area, everything is open.

Airway stents are by no means 100% successful so this is just another explorative route to see if he will be able to extubate and finally come it the ventilator. These do however come with a long wait. 3 weeks ago it was decided that he could have one. 2 weeks ago one was ordered for him, so for now, we wait for it to arrive andfor him to have it fitted before we can make any ventialtion progress. So, for now, we wait.

His continual infection – this has been a big one. Since Thomas was 3 weeks old I have asked for his immune function to be tested due to the continual infections he was getting when so small and due to the severity of them. As you know, each time he is hit with one, it knocks him badly. His ventilation increases and he takes a while to come back from them, increasingly so. This, I have had to really push for him to have done. Finally, when Thomas was 15 weeks old , the immune testing was done and the results were pretty shocking. Thomas is severely immunocompromised. His T cell function is next to none. So, severe as this is, at least we now know, and he has immediately put on prophylactic antibiotics and has been given igG (antibody) replacement therapy which arms his immune system with important antibodies that he needs to fight infection. This will be a lifelong necessary treatment as he doesn’t have the ability to mature the T cells needed to fight infection so will be susceptible to the slightest of infections (which reinforces keeping him away from any possible source of infection).

Other than this, the last 3 weeks or so his ventilation has been up and down, and we seem to have found a level that he stays around, is able to thrive on whilst we wait for his stent. Until then, we will continue to wait…!