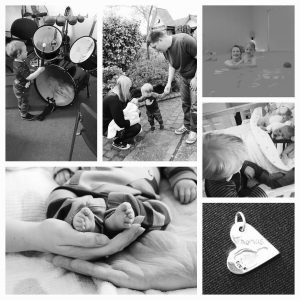 As you all know, Thomas passed away on the 29th April, at 6 months and 2 days old in Alder Hey intensive care unit. I’ve spoken a lot about the love, care, compassion and expertise that Thomas and our family received during his whole stay in ICU and how incredible the entire team at Alder Hey are, that looked after Thomas and us as a family.

What I haven’t spoken about much is what happened next.

I’d imagine that it’s an impossible thing for anyone that hasn’t experienced the death of a child to even attempt to imagine. So, i’d like to share with you how our family was looked after, cared and provided for in the hours, days, weeks and now months after Thomas died.

An absolutely invaluable charity that provides care for seriously and terminally ill children.  Claire House is all about bringing a sense of ‘normality’ into the lives of the families who have seriously ill children through memory making, providing respite care so the ill children are looked after and are able to access some amazing facilities while the family have a break to recuperate/have some time with other siblings memory making or all spend time together in the hospice, knowing that their child’s every need, physically, emotionally and medically is covered by the team including nurses, doctors, play specialists, chefs, house keepers, etc during their stay there.

However, not all families are able to take their children into the hospice. Thomas for example. He never left the hospital so wasn’t able to access these facilities. But this doesn’t stop Claire House providing for these children. For Thomas’ entire hospital stay, we were visited at least once a week by Nurse Consultant Lesley who gave support to us as Thomas’ parents, often finding me in a difficult situation as I frequently received difficult news about his conditions and where he could be heading. We would talk though his latest health issues, talk about options, and towards the end of his life, talk about the ‘what ifs’. Which was incredibly difficult but meant that I was able to start to think about where we would be if the worst did happen.  This support was invaluable whilst in ICU. But it hasn’t stopped there.

Thomas was also visited by play specialists weekly. Most often Kerry who knew Thomas’ temperament well and would come knowing that he had likely had a strop earlier in the morning and that he wouldn’t always be up for play time, so instead, she would read to him, or make memories for Dan, Henry and I in the form of pottery or cards or jewellery. Her talents were endless and because of Kerry, we have some absolutely beautiful items that capture that moment of his life. From his tiny feet at Christmas to his slightly bigger feet at Easter, his hand and footprints, forever to be worn around my neck in a beautiful necklace and as a keyring for Dan, to plates (that I’m too afraid to have out with a 2 year old running around the house!).

While Thomas was critically ill in intensive care, support from the team at Claire House meant that we were able to bond with Thomas and make these much cherished lasting memories. But their involvement didn’t end when he died.

I was aware that Claire House were able to provide for families in the devastating circumstances that their children had passed away. They have two beautiful suites called the ‘Butterfly Suites’. These are suites that include a chilled bedroom for your child, with a bed/cot/Moses basket, enabling you to spend some time with your child once they have passed away. Attached to the bedroom is a relaxing living room area where you can sit with your family and friends or just spend some time alone, and just be close to your child, not having to leave them anywhere, knowing that they are just on the other side of the door.

So, what happened for Thomas and for us…

Thomas passed away at 9.04am on 29th April 2018. It was already an incredibly challenging time at Alder Hey Hospital during this time. We were moved (when ready) down to the bereavement suite in the hospital to be able to spend some more time with Thomas. At this point, we decided that we wanted to leave Alder Hey with Thomas and I remembered the conversation that I’d had with Lesley, just 3 days previous. So we requested to go to Claire House. Within hours, our request was accepted and we were on the way through the tunnel, Thomas wrapped up tightly in my arms (I was terrified of him getting cold). We arrived at Claire House to be warmly greeted by the Butterfly care team member Sheilagh.

Both Dan and I had no clue what was going on, what to expect or even what to think. We were completely lost. Our baby had died. He was in my arms and we were out of the hospital. We were traumatised from what had happened though the night and that morning, we were completely exhausted from being up for over two days. But Sheilagh took complete control. She took us into the suite. She greeted Thomas just as if he was still alive. She talked to him, cared for him and took him to his bedroom that had been set up just like the nursery that he should have had at home. She made us both a brew and sat with us. And the rest of the day is a bit of a blur. But that evening, she made it so we could bath Thomas for the first ever time. We washed him, washed his hair and dressed him in a baby grow that I’d wanted him to wear since he got it for Christmas. It was beautiful. But it was bittersweet.

We hadn’t eaten for a couple of days. We weren’t hungry (or so we thought). But she made sure we had something to eat (and oh my gosh does Claire House do food well!!). Lesley also came in to see Thomas and to support us. Even though it was a Sunday and she was having her own weekend. They were incredible.

After your baby dies, you have to register their death before anything else can proceed. Something neither Dan or I had thought about or were ready for. But this was all taken care of for us. The appointments were made, we just had to turn up. The appointments that then had to follow. The funeral director, all arranged for us. Anything we needed, was done for us. Planning the funeral, making arrangements, any phone calls. All taken care of. We were able to have all the stress of planning and organizing taken out of our hands.

About a week and a half into our stay, we met Sharon, another butterfly care worker who was just as amazing with us and with Henry. Helping us with day to day, sitting in meetings with the funeral director and just being there to answer any questions we had.

Thomas was checked on frequently, he was talked to, treated like any living baby would be. He was changed, dressed and wrapped up. It was arranged to have ‘Remember My Baby’ photographers to come in and do a photo shoot of Thomas, and some of Dan and I with him and also were able to include Henry when he chose to come over and see Thomas. More precious memories.

We stayed at Claire House from the 29th April until the day of Thomas funeral, almost 3 weeks later. Dan, Henry and I. We were given a bedroom in the Hospice. We were provided with 3 meals a day, endless tea and cake and Henry was frequently looked after by the play team, taken to play, draw, paint, to enable Dan and I to sort out things like writing the eulogy, choose some readings or to just give us some time to ourselves to spend with Thomas when we needed it.

We had full access to all the incredible facilities at the hospice. We took Henry to the art room, we took him to the play park. He loved spending time in the living room playing with the toys, the dining room watching the fish, the sensory room playing with the lights and the sound box, the music room playing the drums but most of all, he loved the hydrotherapy pool. During the worst time of our lives, we still needed to look after and provide for Henry and Claire House made that so much easier than it would have been anywhere else. Being at Claire House for Henry was a fun time and whenever we go back now, he still remembers where the pool is, where the sensory room is. It gave us a focus and gave us some time away from our raw grief whilst making sure Henry was ok.

So now, almost 6 months on, Claire House is still a large part of our lives. Lesley frequently checks in on us to see to see are doing. We were invited to the annual Memorial Day, where all Claire House children who have passed away were remembered and honoured. They hold events for siblings and will continue to do so for Henry up until adulthood. I attended an open day at the new up and coming hospice site in Liverpool and gave feedback on services and events. They will always be a part of our lives now into the future.

Why have I decided to share this? Although Dan and I grew up knowing about Claire House (from going to New Brighton Primary school, knowing all about Claire and through family friends on Dan’s side) we were completely unaware of exactly what they do until we started accessing their services. If I can raise awareness of the incredible work and facilities that they offer this will mean more people are aware of what actually goes on there. So I ask you to please share this. Let people know that this amazing place exists and what it does. We will never be able to thank them enough for all they have done, and continue to do for our family.