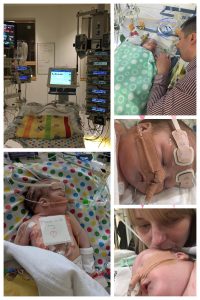 Today is a day that I thought about a lot in the 6 months that Thomas was in ICU. What would we do to celebrate his ‘heart day’. His ‘heart anniversary’. His ‘heartiversary’. In the months before Thomas was born, I connected with many parents at different stages of their heart journey. Those who had just had diagnosis’s, those who were new mums to heart babies, those who had been on this journey for a long time. And over this time, my world became filled with new terms, which became familiar terms. New achievements, which id never thought or heard of before. And celebrations. For everything. For milestones, for surgery successes, for good news, which up until then, I’d totally taken for granted.

But for all of them, there was one thing in common. They all celebrated this epically important day in their children’s journey. Their ‘Heart Day’. An anniversary of the day that their children had their open heart surgery.

The day that their children’s lives hung in the balance. The day that anesthetists would sedate and anesthetise their children, sending them off to sleep right in front of them. The day that surgeons would open their chest, put them on bypass and open and attempt to repair their (in most cases) tiny heart. The day that every parent didn’t have a clue what to do with themselves. The breakdown on the ward or in ICU saying goodbye following giving them ‘that last kiss’ on the head. The pacing the hospital corridors, holding the phone like your life depends on it. Checking that the battery is at 100%, checking that it’s still on loud and hasn’t accidentally turned off. Refusing to eat/eating everything in sight (I’m a refuser…far too sick a feeling to contemplate food). The minutes which feel like hours and the hours which feel like days. The time expectation you were given, passed by and now an indescribable, gut wrenching dread…’what’s gone wrong, it’s taking too long, they said 6 hours…it’s been 7’. Then you get the much anticipated phone call to say it’s been a success and your child is in recovery and will be back on ICU in the next hour. The RELIEF. Pure emotional relief. Never felt anything like it. Your child is alive. They made it through the surgery having been told there was a 25% chance that they wouldn’t. They’re not out of the woods, but they made it.

Then there’s the next 24 hours. Finally getting to see them. Wanting to scoop them up and hold them tight and never, ever let go again. But of course you can’t do that. They have an open chest, they have a whacking great scar half the length of their torso. Their ribs have been forcefully opened. There’s no holding that baby!  So you sit next to them and hold their hands and stroke their hair and talk to them. You tell them how amazing they are and what a fighter they are. And how much they have ahead of them and the things that they can achieve now. That at 13 days old they’ve been through more than most will in a lifetime. And you wait. For them to recover. For their medications to reduce. For their inotropes to be turned off. For their sedation to come down. For them to wake up. And when they do, it’s another best ever feeling.

Today is Thomas’ Heart Day. One of the worst and best days of my life, all in one. One year ago today we were filled with fear, dread, anxiety, but yet hope, excitement and elation. The first day of the rest of his life. So, the rest of his life was 172 more days. But, he aced heart surgery!

So proud of you Tom Tom!